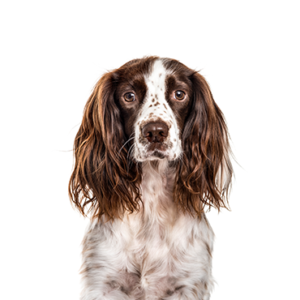 This dog breed is obedient which makes it a dog you won’t have a problem hanging out with. Among this breed are the show dogs and the field dogs.  The field dogs have fit appearances making them look more dangerous than the ones used for the show.

Some characteristics of the show dogs are droopier ears, dewlaps and dangling flews. They are more heavily boned than the more agile field bred

The English Springer Spaniel is likened to the English cocker spaniel. The two breeds are very similar except that the latter is of smaller stature.

These dogs must have descended from the same origin. In 1576 John Caius described the spaniel in his book, ‘Treatise of Englishe dogs”.

This book explains all the British breeds and their functions. The English springers and cockers were among the same litter; the smaller ones called cockers. The cocks were majorly used to hunt woodcocks while the springers were used to flush game while hunting.

Most of the spaniel breed was developed in the 19th century. The most notable breeds that must have been developed into the modern English Springer Spaniel are the Norfolk and Shropshire spaniels.

This breed is notable for its intelligence. The breed has been notably used by intelligence over the years. It has been very impressive in its feats as regards performance as sniffer dogs for military intelligence.

Having a large outdoor space is essential while having an English spaniel springer, the dog doesn’t do well in confined spaces. The dog is highly sensitive which is part of what contributes to its good intelligence.

The weather is not a problem for this breed of dogs, they can thrive in hot and cold regions. The English Springer Spaniel normally has two coat layers That can help it withstand cold to a very good extent.

The undercoat is soft and very thick while the outer hair is long and wavy. They shed heavily in summer and spring and only occasionally in autumn

The spaniel springer is a well-balanced dog that combines good looks and functionality, underneath that gorgeousness is a very powerful breed.

Exercise is going to play an important role in the life of a Springer Spaniel, the dog is very energetic and agile. This breed of dogs can be very playful, they need regular exercising and medium intensity very often.

The Springer Spaniel needs extensive grooming; its furs need delicate attention. Since it is a typically playful and energetic dog, it will bring back lots of dirt and maybe parasites that you need to care about.

The dog’s coat can be combed and brushed daily to ensure that dirt doesn’t lodge in its furs to cause skin problems for it.

The unregulated breeders who are selling outside of the USDA regulations and without a license are what we consider to be “Puppy Mills.” We are committed to offering English Springer Spaniel puppies who will grow up to become important members of your family. We only purchase puppies from the very best sources, and we stand behind every puppy we sell.

Yes, however, it is recommended to have the process gotten over with when they are between the ages of four and nine months’ old.

Yes, the Springer Spaniel is a very hairy species, having two coats of hair that can make the to be a big deal to groom

The Breed is an easy-going species and relates well with children. however, children should be taught the appropriate ways to interact with dogs to avoid provocation.

Yes, the Spaniel springer is extrovert and very friendly. It becomes easily friendly with other animals. However, it is important to grow your pets together from a tender age for a better relationship among them

Getting a puppy English Springer Spaniel can cost as much as $1000 to $3000. Prices vary. Please contact us for availability and cost.

No, the Springer Spaniels don’t drool

The English Springer Spaniel Is expected to live between the ages of 12 to 14 years.

Yes, the dog breed is willing to give anybody a try at friendship. The dog’s friendliness seems not to have a boundary

Generally speaking, the Springer Spaniels are not likely to become overweight, however, they should be fed moderately to keep a favorable balance of the body.

The breed is susceptible to any bacterial and viral infections, also Elbow dysplasia and otitis externa which are the only major health challenges the breed can face.

An epitome of beauty and strength, the English Springer Spaniel is friendly, energetic and adorable. It is very protective of its owners and is a good family and hunting dog breed.

Are you interested in purchasing a English Springer Spaniel?