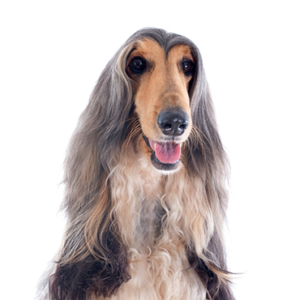 With its ring-like tail and one-of-a-kind silky coat, the Afgan hound is one of the smartest dogs ever. The Afghan hound expresses such an amazing hunting prowess and has been a handy and most loved breed from its home country of Afghanistan and now the darling of anyone in search for added security. Discover more about our Afghan Hound puppies for sale below!

From the nomadic communities of Afghanistan came the Afgan hound, having been used for centuries in the country specifically for hunting before making its entry into the United Kingdom around the 19th century. Since its arrival in the U.K, Afgan hound’s popularity has been on a steady rise due to its astounding agility, making it a favorite choice for shows and concerts. So, outside hunting for clues, this highly brilliant breed is fun to look at during shows. Currently, they are about 13 types of Afgan hound and it is believed that Alexander the Great may have brought it for the first time into Afghanistan.

If you are looking for really smart dogs, Afgan hound is just the choice for you with its excellent agility, distinguishing itself from other breeds. They are also very stubborn and strong-willed, which makes them difficult to train, especially for new dog owners but are greatly affectionate to its family members.

The Afgan Hound can be a bit with strangers but get along finely after a while, since they are active dogs, keeping them for long on apartment might not help their mental life. As they require continuous engagement and activity and you may find them lying around often when not entertained.

More so, the afghan hound can cope well alone for prolonged hours so, if you are working, having this dog is not a bad idea but they need a lot of exercise or walks being a hunting dog.

The Afghan hound can cope well in an apartment, houses and outside lands because they are extremely active dogs, you will have to ace a lot of stuff to keep it lively in the apartment. Now, they might get a little unpredictable and dull if deprived entertainment for long so, if you do not have a backyard, try to come up with activities to stimulate its mental life.

The Afghan hound can cope being left alone for long hours, making an ideal dog for working people and for owners that find themselves traveling often. However, you will have to practice leaving it alone quite early in its life to enable your dog to get accustomed to it and not get quickly bored in later life when occasionally left alone. Because the dog loves to lie around and give a calm and relaxed mood, it gets very friendly around children.

Hot and humid weather conditions are not for Afghan hound because of its long and thick coat but you will have them lit their sparks during the cold season. This, of course, is due to their original cold climate of Afghanistan.

You are already familiar with the activity-hungry nature of the afghan hound, which means that the dog should be given lots of exercises as a hunting dog. Walking a mile every day is important to keep up with its agility demands.

If you give it exercising avenues often you will have for yourself a finely happy dog. If you have a large land area, you can let it run around it as often as possible, and you will love the cheerful tail-wagging dog around your home.

The thickly coated hound is certainly a fan of daily grooming and needs a lot of care around its hair treatment. Why? Due to its fuller hair, its hair knots easily gets tangled and frizzy which demands daily brushing to detangle knots and the twisted hair-tips.

More than special hair brushing, the afghan hound needs a daily bath as part of the things to maintain its coat and may sometimes require a little oiling of the coat if they feel too dry and coarse. This is one of the reasons Afgan hound are never a good pet choice for new dog owners because its maintenance demands can be quite daunting and impossible to keep with.

But in any case, having a dog groomer as a friend can be helpful when you want the best care for your dog’s coat at times when you find yourself not meeting up. You also need to trim the coat often to reduce the knot formation and keep the coat in an appreciable condition.

Regular brushing of the teeth to prevent dental challenges and trimming of its nails especially if you are in an apartment are part of good grooming too.

The unregulated breeders who are selling outside of the USDA regulations and without a license are what we consider to be “Puppy Mills.” We are committed to offering Afghan Hound puppies who will grow up to become important members of your family. We only purchase puppies from the very best sources, and we stand behind every puppy we sell.

Yes, they are very affectionate and loyal to their owners.

Yes, they love to lie around and are calm most of the day, making them a good pet around children.

Yes, they get finely along with strangers.

Yes, Afghan hounds can cope finely in apartments, houses and outside. But you will need to engage it a lot more in the apartment since it is an active dog.

Yes, but you will need to practice this early so that they grow accustomed to it.

Yes, as hunting dogs, a mile a day is important.

Yes, because of their thick coat.

No, their thick coat will make it very uncomfortable.