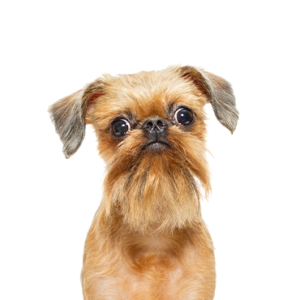 Once upon a rat chaser, the intelligent and smart griff met fortune the day it found itself inside the Belgian queen’s carriage and from then it had little business with rodents but earned for its chubby self the royal life. with its inquisitive heart and looks, Brussels griffons will effortlessly woo the hardest heart to love it and to stop shows with its awesome personality. Now, would you like to have a griff? Discover more about our Brussels Griffon puppies for sale below!

This kind of dog was first seen on the walls of Van Eyck’s portraits of the Arnolfini’s marriage and these fine, muzzle-faced and rough-coated dogs were originally bred to chase away rodents from stables. In early 1800, these dogs began to grow in fame and gradually left the rodent-ridden stalls to royalty.

During the middle of 1800, it was believed that the pug, the Brabancon (old Belgian dog) English toy spaniel, and Yorkshire terrier were crossed to produce the present-day Brussels griffon, taking the name of its hometown.

Around 1870, luck shone its way and the Belgian queen, Queen Henrietta Marie couldn’t get enough of the dog and from there, griffs became a welcome and most adored pet in the Belgian court and the royals went further to refine its rugby appearance to something more appealing and lovable.

The breed later made its royal entry into the U.S and got registered on the American Kennel Club in 1910 and almost became endangered but for the collective zeal of Britain and American to preserve its existence. And in 1997, Brussels Griffon landed a breakthrough with its featuring in the screen fantasy “as good as it gets.”

This toy dog is a wrap of confidence, devotion, courage, headstrong, and mischief, yet cutely adorable, the kind that invites lovable stroking from your hands each time it welcomes you at the door. Brussels griffons are very tolerable of other animals, pets and older children.

But for toddlers and small children, it may not be a good idea considering their small nature, as the kids may mistake them for actual toys an action that may get misinterpreted by the dogs. They are also given to much barking and climbing, griffs love the company of their family members greatly and cannot cope being left alone.

They are sensitive dogs especially if treated roughly they may bite on fear-impulse, they are also a bit difficult to housebreak owing to their stubborn nature but once you patiently aid them through you end up with a smart chubby and lovable pal.

Griffs are lap dogs and love to live with its family members if you are living in an apartment, you can have your pet with you as it can cope finely as long as your lap is free for it to coil itself on it at the end of the day. They are good in houses too and loves to hop around as it likes.

Being left alone is among the things your terrier-looking pet dislikes, so if you are always busy, getting a Brussels Griffon is not a fun idea. Griffs are not fans of cold or hot weather and are a little friendly with strangers, they also have the potential of straying which means you will need to have your house fenced. And when you go on a walk with your pal remember to use its leash.

Brussels Griffons are active dogs and require moderate exercises to maintain good mental health and to remain your lovable companion the whole day. At least half an hour of minimal activity every day is enough to get your buddy vibrant all over again.

Because Brussels Griffs are happy dogs and they have a liking for romping, chasing the ball and kite, and running around the garden or the park are among the things they love and look forward to every day.

Brussels come in two kinds and they both have different coat types, one is rough and the other smooth. The rough-coated dogs are non-shedders and most of them have their hair cropped leaving the distinctive beards only.

While the rough-coated griffs require weekly brushing of the coat with a pin-brush or metal comb to prevent mat formation and daily brushing on shedding days to remove the dead hair. The nails need to be trimmed often to avoid pains when they are walking or playing, the ears checked and cleaned regularly to prevent wax buildup and regular brushing of the teeth to keep good dental health.

The unregulated breeders who are selling outside of the USDA regulations and without a license are what we consider to be “Puppy Mills.” We are committed to offering Brussels Griffon puppies who will grow up to become important members of your family. We only purchase puppies from the very best sources, and we stand behind every puppy we sell.

This breed is strictly a lap dog and you can’t get enough of its fun, because of its playful nature and it loves to follow you everywhere you go.

Brussels griffons are very intelligent dogs but forced training may not achieve good results. What you need is a lot of patience and consistency to help.

Regular hair brushing, nail trimming, bathing and teeth brushing. But the grooming varies for the different coat types though.

They are harmless with older kids but considering their tiny and chubby nature they may get accidentally stepped on by small children which may trigger aggressive behavior from them. So, having griffs with kids may not be a very brilliant idea.

Brussels are playful dogs and a little brisk walking for about half an hour will be fine.

No! the last thing this breed of companion wants is to be without its family, loneliness infuriates them, so if you are busy you can get some other breed, not a Brussel griffon.

Yes! They love romping along with other animals.

No! heatstroke is terrible for them.

Having a snugly cute companion with huge soulful eyes is the best sight to behold first thing in the morning and the last before closing your eyes to sleep. If you love this feeling, go for a Brussels Griffon.