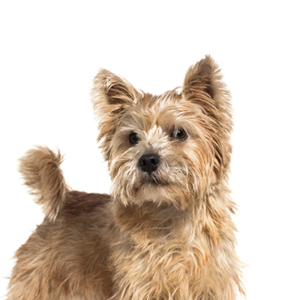 The Norwich Terrier is a dog that was specially bred for the purpose of hunting rodents. It is a friendly dog, but it is also the rarest terrier breed because of its low litter size and the high need for a cesarean birth. Usually, the Norwich Terrier comes in different colors such as grizzle (a mix of red and black hairs), black and tan, wheaten and red. Discover more about our Norwich Terrier puppies for sale below!

The Norwich Terrier is a dog breed that originated in the late 19th century in Eastern Anglia, a rural region of England that encompasses the town of Norwich in Norfolk county. At about that time, the Norwich breed was actually a mix of different terrier dog breeds and went by names such as Jones terriers, Cantab and sometimes, Trumpington.

The idea back then was to breed dogs that were smallish hunting dogs that were red in color and also had a friendly character. At about 1914 – 1928, the first Norwich terrier, got to America after a Philadelphia horseman Robert Strawbridge, Esq., bought it and then brought it to America.

The Norwich Terrier is usually a social dog. It is courageous, hardy, but also friendly and very intelligent. The Norwich terrier is never shy, neither is it a troublesome or quarrelsome dog. However, the Norwich terriers are most popular for their active lifestyle.

As a result of their energetic and active nature, the Norwich terrier is one breed that is almost always hungry. Basically, a Norwich terrier would eat anything edible that comes its way. Because of their social nature, they thrive better when they’re in the company of their owners. For this reason, it is usually better if they are allowed to be inside the house instead of locking them away in a kernel.

As earlier stated, the Norwich Terrier is a dog that thrives better when it is made to stay closer to its owner. It is a fun companion that loves to entertain its owner even though it has a mind of its own. The Norwich terrier cohabits peacefully with other pets if introduced to it while it is still a puppy.

Although the Norwich terrier is usually fun, it may bark at a stranger so its owner is alert that someone new is in the vicinity. However, once it gets acquainted with its owner visitor, it falls back to its usual friendly nature.

It is also very important to note that great care and supervision must be observed when trying to make it cohabit with a pet rodent. The reason is that it is naturally a rodent hunter and may mistake a rodent pet for a prey.

Because of its original purpose as a rodent hunter, a Norwich Terrier is always very active. The level of energy it has needs to be expelled through exercises such as daily dog walks and letting it play when it is convenient for both the owner and the dog. It can also be allowed to contest in agility competitions and flyball competitions. Practicing for both competitions also counts as a great exercise routine for the dog.

Typically, the Norwich Terrier has two coats. It has a top coat and an undercoat. The topcoat is harsh and wiry while the undercoat is its exact opposite; warm and soft to the touch. These two coats are dependent on each other, and so, to get a perfect coat for the Norwich terrier, some grooming routines must be observed.

The coat is groomed by stripping the oldest hairs off it with a special comb called the stripping knife. Another great grooming routine is for the owner to hand-strip the coat regularly to achieve a “rolling coat”. A rolling coat has all of the dogs’ hairs growing at equal length.

The unregulated breeders who are selling outside of the USDA regulations and without a license are what we consider to be “Puppy Mills.” We are committed to offering Norwich Terrier puppies who will grow up to become important members of your family. We only purchase puppies from the very best sources, and we stand behind every puppy we sell.

The Norwich Terrier has a life expectancy of twelve to ten years.

One to two cups of dry dog food is okay for a Norwich Terrier. The food should be divided into two portions. Apart from that, the Norwich terrier would eat basically anything that comes its way.

Norwich Terriers are really good with children. They are really active dogs and so, will enjoy being around children. When trying to keep them around kids, the best idea is to buy a puppy for little kids and an adult terrier for older kids.

Once you hear the feet of the Norwich Terrier clicking on the floor, you know it’s time to trim its nails.

The teeth of a Norwich terrier should be brushed at least 2 to 3 times a week to remove tartar.

At least twice in a year.

The Norwich terrier comes in different colors like black, tan and wheaten.

Yes, the Norwich terrier is the smallest of the terrier breed of dogs.

The Norwich terrier is one dog that’s fun to be with, easy to care for and good with the family.